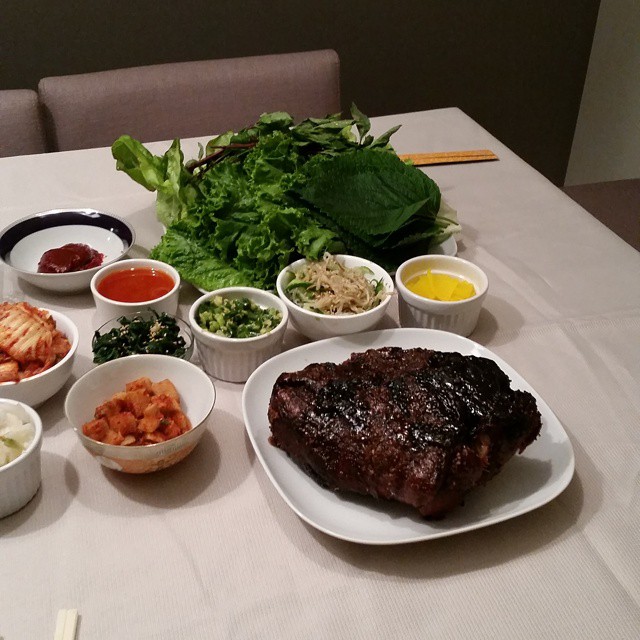 It was my birthday last week.

The original plan was to book some space at Anju and have their famous bo ssam dinner, but unfortunately they were already booked, so I (crazily!) decided to take matters in my own (and my fiancé B.’s) hands and host nearly 30 people at my house. (Thank you B.’s parents, for lending us a billion small bowls.)

Bo ssam is a traditional Korean dish featuring thinly sliced boiled pork belly, many side dishes (banchan) all wrapped up in cabbage and other greens. David Chang of Momofuku made bo ssam as we know it popular in North America today – slow-roasted pork shoulder, with sides (including oysters), wrapped up in soft butter lettuce with sauces and side dishes. His recipe was printed in the New York Times two years ago, making it widely available to readers to try at home (in theory at least).

The pork itself is simple enough – you let it marinate overnight in a simple rub of kosher salt and sugar, then shake off the excess salt (We used half of what was originally called for, as per reading comments on other blogs, so we didn’t have any.) We couldn’t find any bone-in pork shoulder, so we cooked about 16 lb of boneless stuff at 300˚F, taking it out to baste every hour. 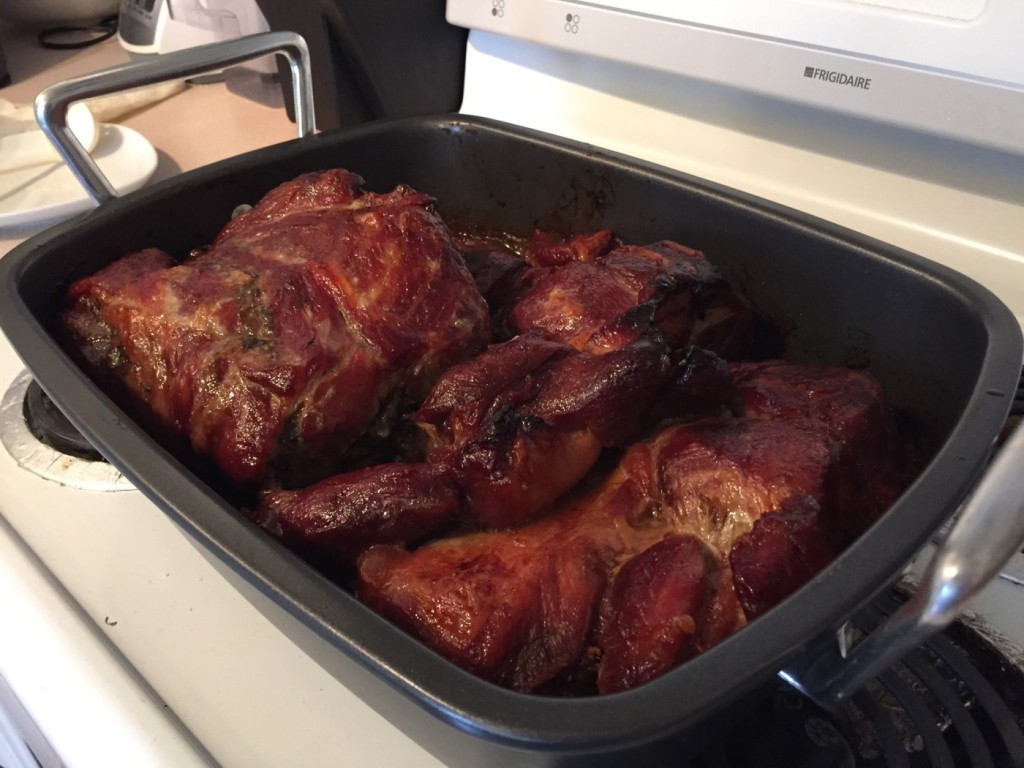 The recipe comes with two sauces – ssam sauce, which is a simple combination of ssamjang (Korean fermented soybean paste), gochujang (Korean fermented hot pepper paste, aka the next sriracha), canola oil and sherry vinegar, and a delicious ginger-scallion sauce that is very similar to the stuff you get with steamed chicken at Cantonese restaurants, except for the addition of vinegar. We skipped the oysters recommended as an accompaniment; instead, B. made out like a bandit at the local Korean grocer, buying a bunch of different kimchis, as well as making a bean sprout and cucumber side dish, a spinach side dish and our favourite Korean tofu dish. (Pro-tip: Don’t make as many side dishes as we did because it’s been more than a week out, and we are still eating leftover kimchi.) We had three rice cookers full of rice, but in the end only needed two.

B. also purchased some perilla from the Korean grocer for wrapping. Also known as shiso (though the Korean variety is slightly different from the Japanese one), it is a large minty, peppery leaf that is sturdier and more flavourful than lettuce.

Preparing the pork was the easiest part of the meal, and it seemed to be everyone’s favourite! There were nearly no leftovers of the meat and so now I’m still figuring out what to do with the heads of lettuce still in my fridge! (Three down, three to go)

Place the pork in a large, shallow bowl. Mix the white sugar and ½ cup of the salt together in another bowl, then rub the mixture all over the meat. Cover it with plastic wrap and place in the refrigerator for at least 6 hours, or overnight.

When you’re ready to cook, heat oven to 300˚F. Remove pork from refrigerator and discard any juices. Place the pork in a roasting pan and set in the oven and cook, basting hourly with pan juices, until it collapses and yields easily to the tines of a fork, about 6 hours. (It took about 8 hours to cook 16 lb of boneless pork.) At this point, you may remove the meat from the oven and allow it to rest for up to an hour.

Combine all ingredients in a large bowl. Mix well and taste, adding salt if needed.

In a medium bowl, combine the chili pastes with the vinegar and oil, and mix well.

Preheat oven to 500˚F (we found we had to set it to broil). In a small bowl, stir together the remaining tablespoon of salt with the brown sugar. Rub this mixture all over the cooked pork. Place in oven for approximately 10 to 15 minutes, or until a dark caramel crust has developed on the meat. (The sugar should “foam” when it is ready.) Serve hot, with the accompaniments.